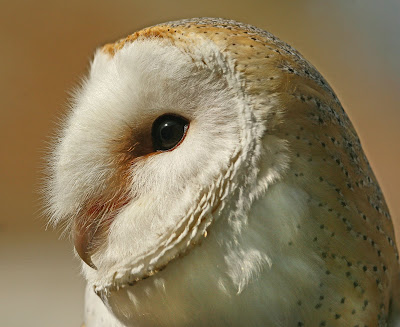 I wish you all, all the best for 2010. For me there are new very exciting Hawk and Owl Trust projects starting. The Long eared Owl project will begin in January and sees' me out most nights looking for this rare Owl from Cornwall to Gloucester. The Barn Owl work will also be exciting as we return to old sites, seeing old friends and chewing the fat with farmers over what could be a major decline taking place in some localised areas, more to follow on this throughout the year. Little Owls will also feature heavily for me 2010. For those that follow the blog regularly will know that Little Owls we have released as re-habed birds have established themselves well in areas were they have been missing for sometime. This year (crossed fingers) I will be placing a camera into the nest of one these new pairs and carrying out some close monitoring of these birds. Also from April a new Schools education project starts, this is working with North Somerset District Council. I have been asked to review more camera equipment during 2010 and there are now some great publications that want my articles. There are many talks I do on varying subjects go to http://www.chrissperring.com/ to see the current list then book through my e mail.

Hope to see as many of you as possible through 2010 at various events or lectures.

BFN and have a great New Year
Posted by Chris Sperring at Wednesday, December 30, 2009 No comments:

We still have Snow on the ground, first time I can't ever remember Snow on the ground at Christmas before. I'm about to open the Sherry bottle, so as I raise a glass, let me wish all my friends which includes everyone who visits my Blog and Twitter, a very Happy Christmas.
Posted by Chris Sperring at Friday, December 25, 2009 2 comments:

Some pictures of Snow 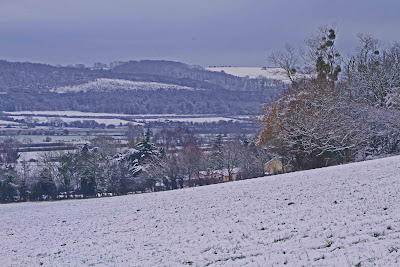 View across Gordano Valley to M5 from the wood Note that line in the sky, the cloud looked quite evil yesterday. 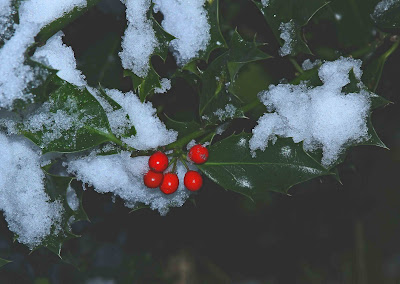 Well it is Xmas 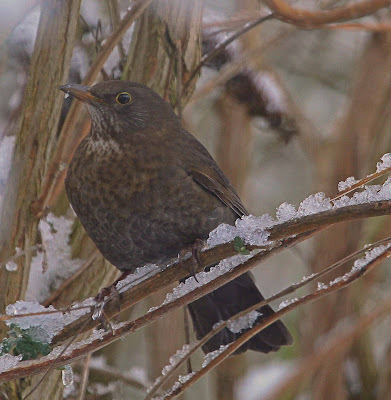 Happy solstice to all my friends living near or in the Artic circle, particularly my friends in Sweden, Norway, Canada and Alaska, this on the day when the sun reaches its lowest point at midday in the sky, something for you all to celebrate as after today the sun starts to make its long return. Here in UK from today up to December 30th we will gain a massive 59 seconds of daylight, whoopee!

Oh, by the way, we have lots of snow in North Somerset (South West England) this morning, which began falling last night, I leave you with this very Xmas looking cherry tree in my garden. 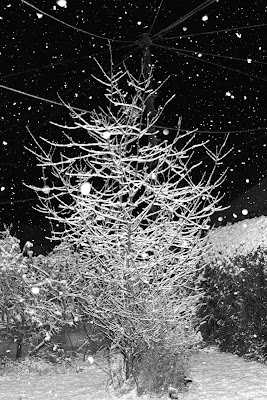 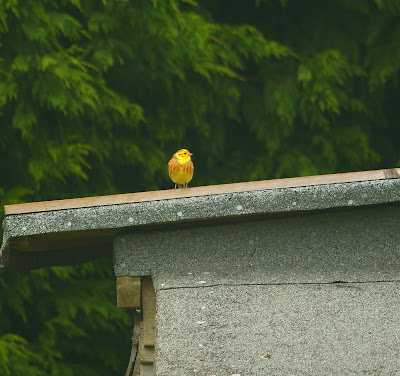 Long way off, so no close up, but hey I don't care when I see a bird like this, its been sometime since Yellowhammers were round theze yer partz. I think the picture tells the story I need say no more.
Posted by Chris Sperring at Wednesday, December 16, 2009 2 comments:

The odd three out, and Long eared Owl update.

It been a busy past 2 weeks. Avalon Marsh 24 hour wildlife marathon is on and booked and this will start on midday of the 29th of May, and finish midday on the 30th. All the Long-eared Owl survey nights are also booked, and we can now confirm that Mendip AONB will fund for a third year for the LEO surveys on Mendip through the SDF. Big thanks to them. I will be e mailing the dates for these surveys prior to Xmas to all those that took part last year, this before sending PR to ask for additional help. Also at the weekend I was sent a task to photograph a Coal Tit and write an article about them here's one of the pictures, how did I do? Answers on the comment board please. 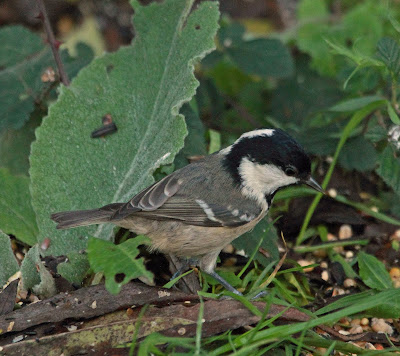 Yesterday (Sunday) I had a return, relaxing not working visit to RSPB Ham Wall nature reserve. It really is a great reserve, full of proper wild areas, not so called wild areas. The reserve places a big emphasis on people as well as wildlife which is brilliant and actually the combination of the 2 as in real wild and real people means that the people can get closer to the wildlife, as it does not feel so threatened, (well done RSPB). I did not go for the Starling spectacular, indeed I made sure I had left before the thousands of people turned up to watch the 15 million Starlings coming in to roost. Well that's what one birder told me as he left the railway pub. 15 Million wow!
I did find one starling as I walked along the old railway line path. 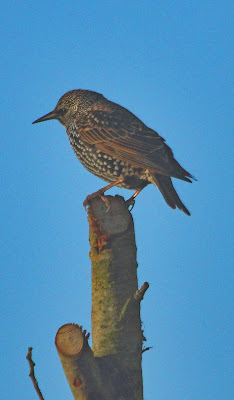 I had good, but distant views of 2 Marsh Harriers patrolling over the tops of the reeds, with slow flight and occasional turns with almost ungainly yet accomplished hovering. What great birds they are much maligned for all the wrong reasons. The scene at Ham Wall this afternoon remined me of being in Sweden when Tom Arnbom showed me a Swedish expanse of Marsh full of tall reeds and lots of Harriers which seemed to be dotted everywhere. As there was I bouncing up and down saying to Tom "oh my god, oh my god its a Harrier, oh there's another and another" There was I nearly passing with excitement. Looking across the reeds and marshes of Ham Wall really did remind me of that Swedish trip, here's a picture view looking across Ham Wall which includes of course Glastonbury Tor. 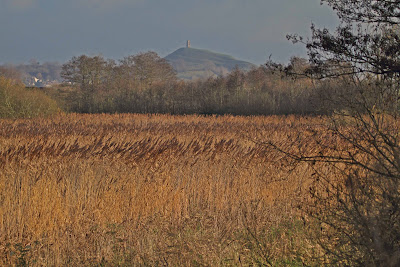 RSPB Ham Wall and the view of Glast Tor, a well run real wild reserve
Sadly the Harrier was too far away for a picture but a wild Kestrel followed me along the path, I have to say wild because when ever I show anyone my Kestrel pictures they all think they are Falconers birds, this is a genuine Ham Wall WILD Kestrel!!!!! 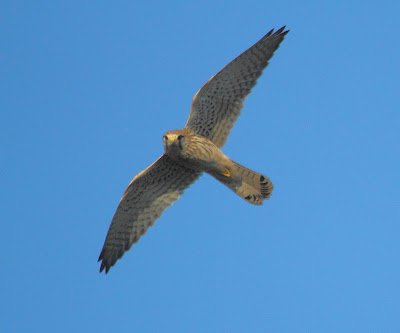 Lastly and last week I took this picture at the Somerset Wildlife Trust reserve of Catcott, you need to study the picture (double click for closer view) then leave a message on the comment board and answer the simple question which three birds are the ones that are not supposed to be on the Somerset Levels and in fact should be around the Mediterranean. 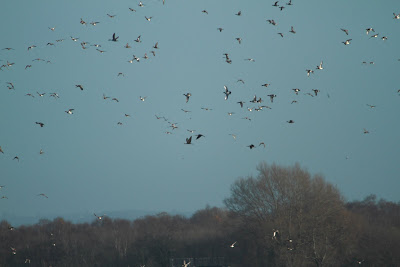 To answer the question just the species name will do, so leave your answer in the comments section. BFN see you all soon.
Posted by Chris Sperring at Monday, December 14, 2009 5 comments:

Well finally it seems winter has arrived. Tuesday morning was greeted by a heavy frost and in came the Blackbirds, we have not had any Blackbirds in the garden since early October now after just one frosty morning the number shot up from 0 to 9. Also today 3.12.09 came the first sighting in the garden of the wintering Blackcap and its a male. When I was doing the live webcasting for Autumn Watch 2 weeks ago, I received an e mail from Tom Arnbom in Sweden to say he had still got Redwings in his garden with Chaffinch's as well, he also mentioned how mild it had been in Sweden meaning of course that these birds had not left yet. Also he did say he had Blackbird singing in his garden 4 months too early, or indeed too late depending on which way you look at it. Just after the frost I went for a walk to Portbury were around 100 Redwings were gathered in the scrub areas. They were very skittish as usual and difficult to get close too. In the cold morning air there was almost frenzied feeding from them as they were striping the last of the Hawthorn berries from the bushes. Here's a couple of pictures I got with the 7D and with no sun on them again I was using high ISO to keep the shutter speed up. 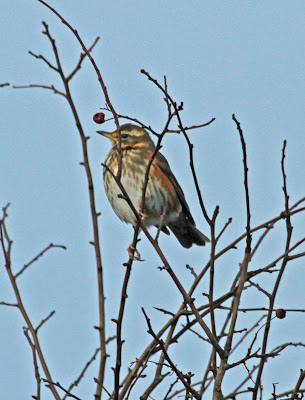 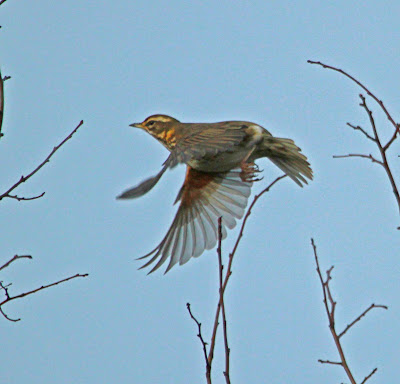 I have been also watching a couple of Short-eareds at night, this is me now returning to an old subject I studied some years ago and that is how much nocturnal hunting is achieved by Short-eared Owls on their wintering grounds. Its early days yet but returning to all the old sites that I had previously studied back in the 1980s and 90s has proved very interesting. More on this as the winter progresses. I have had quite few emails from you about the new camera, the Canon EOS 7D. In particular about testing the video side of the DSLR. I must say I have not had time to give the video part of this SLR a really good go over. Today I did find a Swan or two so I quickly took some footage them and so here is the result.

Edited in Magix pro 15 hence the slow motion which was deliberate on my part.

Here is another short bit this time in normal motion, there is no sound, I cut the sound out, there was far too much wind (no not mine, the natural wind) you can make your own mind up about the quality I'm very pleased with it and can think of many uses for this addition to a DSLR.

Hopefully see some of you at the weekend at Folly Farm for the Owl prowl, to the rest of you keep the emails coming, and BFN.