Dear All. After the news that Oscar the Eagle Owl (Bristol's very own one bird pest control unit) had been re-captured over Xmas, came the news all you Eagle Owl fans wanted to hear, in an e mail from the BOC's Ed Drewitt this morning. Thanks Ed..
Oscar is Back!
Posted by Chris Sperring at Wednesday, January 21, 2009 2 comments:

The countless times I have driven along the Rhayader road in wonderful Wales, and of course the many times I have gone straight past Gigrin Farm (the Kite feeding station). I had never gone to have a look in all the years it has been open, but finally at the beginning of the week I went.
I was gobsmacked to say the least by the whole set up. OK so I have seen Red Kites before, in fact I have seen them here in the Gordano Valley and on the Mendip Hills and those sightings are increasing all the time. However I had never seen anything quite like this. It was nice to meet the people behind the scenes, very friendly indeed, and the little Spaniel Dog was great fun making me throw objects for him, constantly. Its not just seeing the Red Kites, but the whole set up at Gigrin farm is very special, the farm has a very good exhibition which goes beyond Kites and looks at other wildlife as well, there is also an excellent nature reserve, which takes you above the Kite feeding station, it consists of a mix of wetland, hill scrub and grassland areas, I must return to walk this reserve properly in the Spring.
Just before 1400 hrs the Red Kites began to gather in the fields close to the feeding area, very few were perched in trees, most were in the air. Indeed as I scanned the background hills I could see even more Red Kites heading towards the farm. 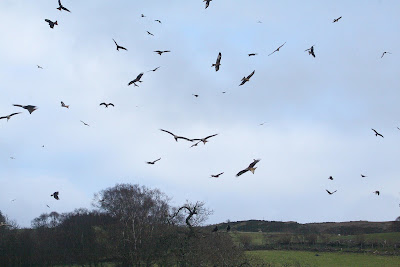 Count the Kites, and no that's not dust on the sensor in the background its Kites!
I did try counting them, but they were moving at such speed and constantly changing position, however the reliable figure for that day was around 400 Red Kites . At 1400 hrs the food appeared from the bucket of a tractor, which apparently had been changed a few days before, so the new tractor was making the Kites more nervous (honestly I did not notice). Other Birds joined in for the free meat. A Heron, Common Buzzard were around already and flew straight on to the ground whilst interestingly the Carrion Crows, Ravens and Rooks were much more nervous than I would have thought. The cheeky ones were three Starling who got out before any of them grabbed the meat and flew off. Back to the Buzzards, with only one Red Kite coming to ground to feed and the others all swooping in grabbing a bit of meat, eating it in the air, and then coming back for more. Where ever a Buzzard was sat quite happily munching on the ground, the Kites would gang up and quite deliberately dive bomb and snatch the pieces of meat that was the closest to any Buzzard that waas sat on the ground, this seemed to be planned with Kites working together to try and put the Buzzards off. 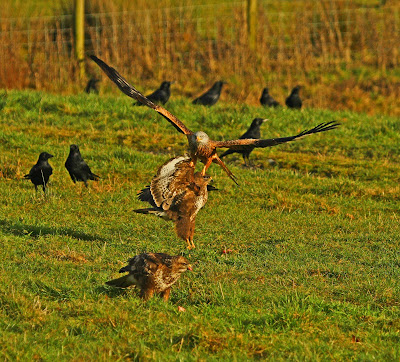 Buzzard tries to defend itself, obviously it will need an aspirin in the morning for this headache 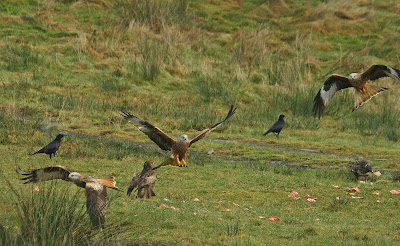 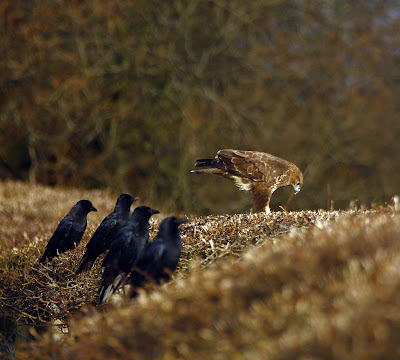 Do you sometimes get that feeling your being watched?

The spectacle went on for nearly 2 hours before the Birds started to disperse away from the feeding area. In that time I had seen many Red Kites and really close. Some interesting behaviour between Red Kites and Buzzards, and of course one of my favourite group of Birds the Corvides who also did not let me down with their presence, and I nearly forgot the one Heron who joined in as well. Gigrin Farm is really well worth a visit if you have not been, indeed now seeing this for myself, I can't wait to return and see this great spectacle again. I did have the camera with me as you can see, however it was quite a dull day so the ISO is running quite high on my Canon EOS 30D this to keep the shutter speed high enough for the flying birds. However may I suggest to people who go to take pictures, to go twice, once to enjoy it, and the other time to take pictures. I found it extremely difficult to do both, hence there are not many pictures. 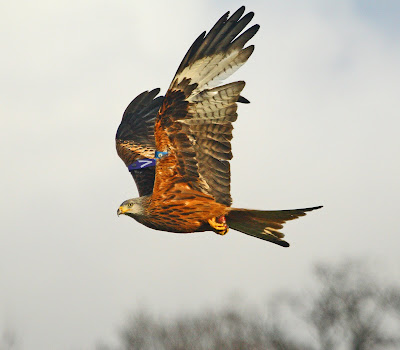 Swan Rescue Portishead, What! You have not heard about this.

What happens when the temperature becomes so low that water begins to freeze. Well most birds begin to abandon the fresh water and head to the salt water of the sea. However here is one Swan that forgot the rules, he is a first year Mute Swan from Portishead lake grounds. I was called by Secret World Wildlife Rescue to help with the rescue of this Swan stuck in the frozen lake, whilst they stood by ready to receive him. I went into action, however not before Someone had been in touch with the Portishead Life Boat rescue team. The plan was, a fully harnessed life boat team member would slide out across the ice and rescue the trapped Swan. Easy? Think again, these guys are the professionals and the fact they have health and safety as paramount is a really good reason why they do this bit and some one like me does not. 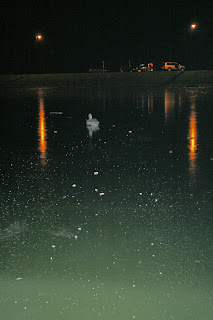 Trapped Swan on the ice of Portishead Lake grounds

Upon arrival the team of two from Portishead lifeboat worked with one person on land, the other tied to the first began inching his way out across the ice. 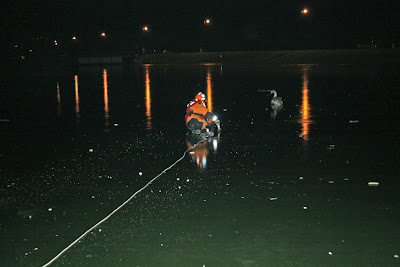 Life boat crewman inching his way across ice to Swan
My part in this was actually simple, and that was to secure the Swan when back on land, ensure it was free of stress and transfer to Secret World as quickly and safely as the wheels on freezing roads would let me. 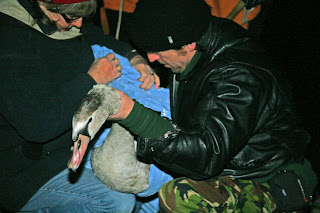 Swan being secured ready for transport 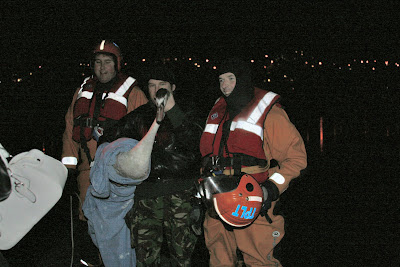 Portishead Life Boat crew, me and the newly named "Frosty" the Swan

The trip on the M5 heading south to Highbridge, and then on to Secret World was OK actually, and around 1 hour after rescue the Swan (now called "Frosty" by the Portishead Life Boat team) was secure at Secret World and under a heat lamp. 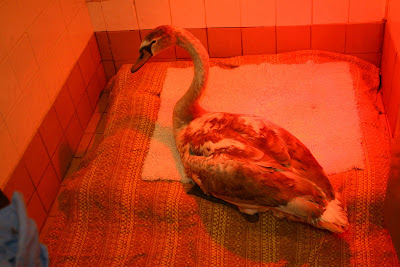 Frosty on the mend at Secret World

Well that all happened on Tuesday evening, 6th of January. Indeed the rescue has attracted a lot of attention, these Swans are Portishead's pride and joy. But the following day I did interviews for both TV channels BBC and ITV, the Radio and press all turned up. So it was a great chance to talk about how other wildlife get affected during these extreme freeze ups and of course lots of messages about how people can help.

On Saturday 10th we were supposed to release Frosty back at Portishead, but the milder weather that had been predicted was a day late. I did a recce at the lake grounds and found that after a another night of minus 6 degrees centigrade, it was no surprise that the whole lake was still thick with ice. 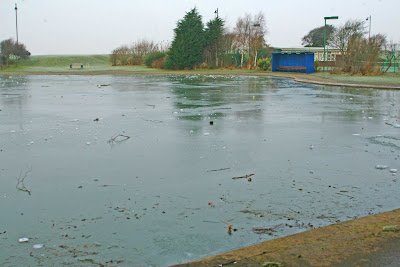 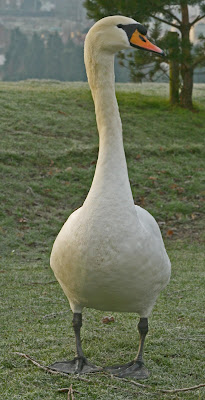 Adult Swan on the edge of the lake Saturday 10th

I contacted Pauline Kidner at Secret World and called off the release, postponing it for another day. Returning Frosty to the lake grounds also caused another headache, as all his 4 brothers and sisters had now moved a short distance to Portishead Marina, (what we yer locals used to call Portishead Docks). Indeed later that day I went to the marina and there was about 15 to 20 Swans gathered in a mix group adults and sub adults, with the yearlings from the Lake grounds.
It may have been possible that by returning Frosty to the lake Grounds I could have just caused the adults there to just push him a way. So I made the decision not only to release on Sunday, but to give Frosty a head start and put him with the gathering of Swans at the Marina.

At 1400 hours on Sunday 11th of January I arrived at Secret World and saw Frosty out in the Swan pen, he looked great and ready to go. 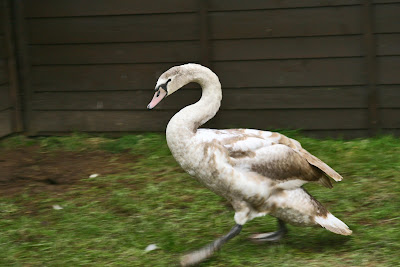 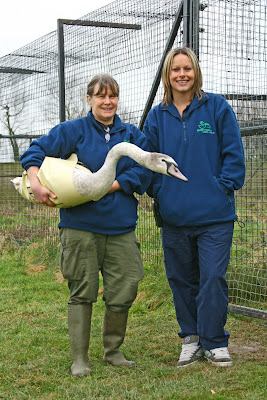 Staff at Secret World, who have done a real professional job for Frosty

I have to say that from the word go on this rescue Secret World have acted like real professionals, the communication at the beginning was brilliant, everything was ready for Frosty when he arrived at Secret World and the fact they have got him back on his feet in double quick time ready for the thaw was amazing. I of course on this rescue was representing Hawk and Owl Trust and I'm glad so many people commented on the fact after seeing the TV bits, how much they enjoyed seeing two organisations working together. After leaving Secret World I arrived at the Marina, and in the car being helped by Secret World volunteers Libby Brown and Leah Sperring, we were greeted by the Swan enthused public and BBC Points West cameraman. 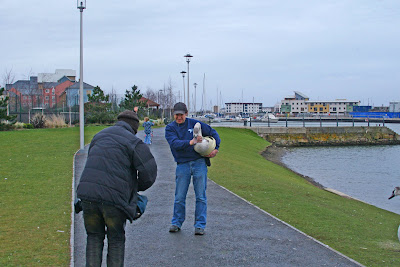 BBC Cameraman, Frosty and Me, no more Rod Hull and Emu jokes please!

After a very quick interview I unstrapped Frosty from his restraining bag, and he was off, in fact just like a Duck to water (sorry bad pun). Interestingly his spell in captivity meant that the first thing he did once in the water was preen like there was tomorrow. The reason for this is to re oil himself to make sure his feathers are fully water proof, I could actually see him rubbing his beak across his preen gland then draw his feather through his beck, really great bit of behaviour. The other Swans looked on with interest and couple of the older more white ones, went out to show Frosty who was boss, this is normal and nothing to worry about. This is a big gathering of Swans and unlike his parents they would not try and get rid of him. 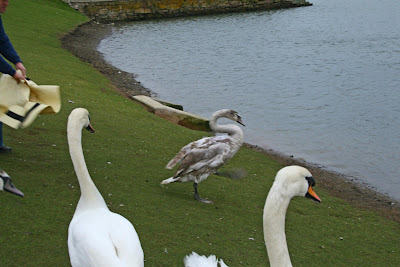 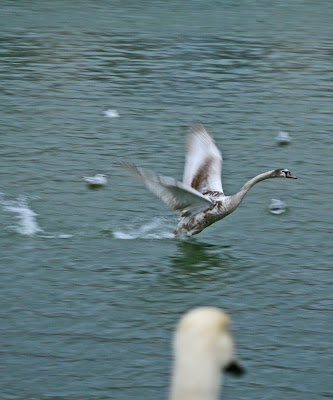 Frosty exercises his wings in the Marina

Well that's it and hopefully Frosty is on his way. He should live for a while at the Portishead Marina, he will of course be looked after by all the Portishead people who come to see the Swans gathering and of course to feed them. If anything does go wrong for any of the Swans the early alarm from the public is assured. From these gatherings young Swans will meet other Swans and in the Spring they will pair off and find somewhere in the Gordano Valley to have nests and bring up their own cygnets.

A huge thanks must go to the public of Portishead who raised the alarm about this Swan in the first place, and of course the rescue would not have been possible without the Portishead Life Boat Trust. Also thanks to Hawk and Owl Trust volunteer Dave Newton who used my camera and took all the pictures at the Marnia. Its very difficult holding a swan and taking pictures at the same time, thanks Dave.

And to Secret World http://www.secretworld.org/ for their communication, speed and care at the wildlife centre in Highbridge.