Its now the breeding season and I'm very busy!

Today saw the start of the nest site monitoring season, and Tawny Owls were the first birds to be checked. We set off early this morning for county Dorset, and a magical woodland so full of colour in the spring like weather. Actually, the wind was quite cold, this until we started climbing steep hill after steep hill, we could have have been on the equator after that.

As no doubt many of you know, especially those who have heard me moaning about the affects of climate change on various species, and also few of you close to me would have heard me curse the last 2 summers for being disastrous for Owl species (except Little Owls). I will now digress, this only because the Blackbirds in my garden last spring and summer produced in all 4 clutches of young and without much predation and plenty of food had an amazing success rate. Whilst this year all but 1 of the first brood of 4 is dead! So whats the difference? Well for those who have forgotten, the last 2 summers have been wash outs which is great for Blackbirds and Mallard Ducks, awful for Owls and Blue Tits, Swallows, House Martins etc, etc, etc, etc. But now the Spring of 09 is dry, but its sting is the fact that I would not say its been warm. Now my garden looks more like a desert than the lake of last year. All this means very few Worms, slugs and alike. So this explains why the Blackbirds are having a bad time, but what about the Owls.

Well for Tawny Owls things could not get any worse. So today we have checked 30 Tawny Owl nesting boxes in two Dorset woodlands, my early predictions of a better year for Tawnies is based on the silence of Tawny Owls during the Long-eared Owl surveys of Mendip and Quantock during February/March, were as in bad productivity years they keep calling. 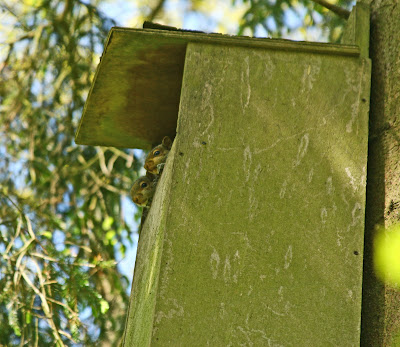 These 2 in the picture above don't look much like Tawny Owls, more like they are keeping an eye out for any Tawny Owls, in case they become part of the menu.

Was this going to be another false start to the season? First ten boxes checked and no Owls!
We continued our mission around these incredible woodlands. The smell of Garlic was everywhere and there almost seemed to be a great battle of the woodland plants being played out before us. 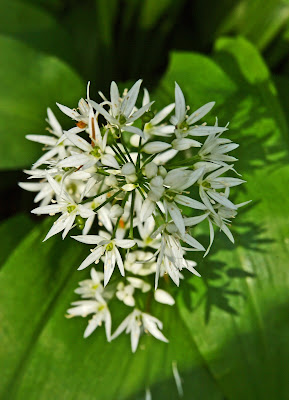 On one side the Garlic now in flower, battling against the Bluebell for space and ultimately supremacy across the woodland floor. 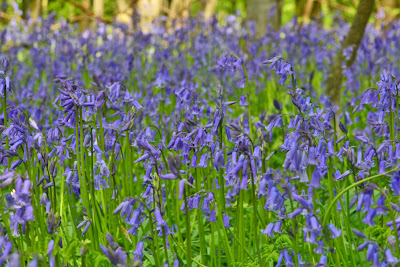 Within these woods there was just so many flora sights, and many different Bird species singing, I was almost being overwhelmed by the sheer brilliance of it all. 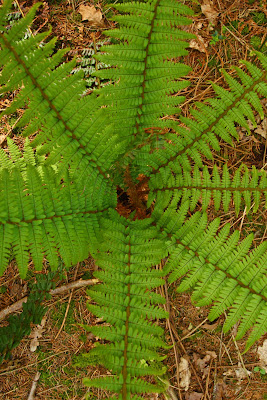 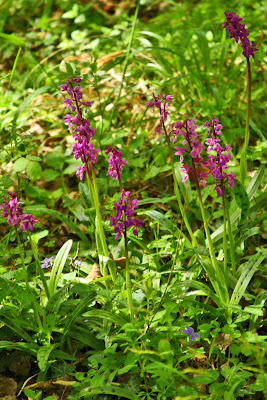 So to conclude, was I right or not? Well out of 30 Tawny Owl boxes checked 9 had nothing in them at all. Jackdaws occupied 5, with 7 being used by Grey Squirrels, 3 were occupied by Stock Doves and Great Tits had taken over just 1, and wait for it.... Tawny Owl's much improved on last year were found in 5 boxes. This is a great success so far and only the beginning of course, however if this result pans out across Somerset and North Somerset the night air of summer will be filled once again with the sounds of many Tawny Owlets

So here's the pictures you are all waiting to see! 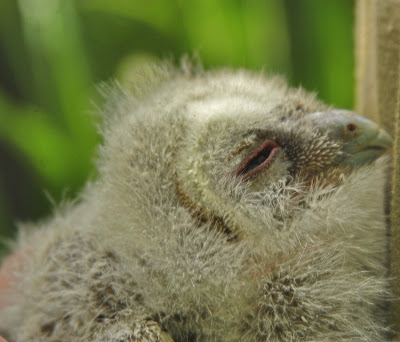 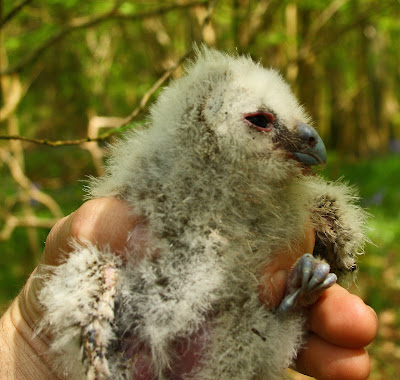 Three of the Owl pairs were still on eggs, whilst the other 2 had both 2 young each. If these 2 woodlands set the standard then these nests are earlier than last year, but 2/3 weeks later on my records of 10 years ago. The most important thing to come out of this is that this is still going to be a much better Tawny year than we have seen for sometime, and boy do they need it! There are many more Tawny Owl nests now to monitor and this timing comes with the news that some barn Owls have began egg laying very early, this means its going to get very busy. I have also checked calling Little Owls near to home, however this was back in late March and again the news is not just good but its very good, as I left off last Autumn saying that they were back calling in areas they had not been heard for around 10 years. So that has continued, pairs in March were recorded calling in all but 2 of the historical sites. However how there success pans out during this dry spell will be interesting.

NOTE FOR All COP GROUPS.

For those of you now waiting for boxes to be checked you will tell from this blog entry, we need to set dates for Tawnies quickly!

For those of you interested in using these results as a climate change barometer then stay tuned, there will be some interesting results being published soon.

BFN and see some of you really soon, oh and if you can't get hold of me, then I just might really be up a tree!

The return of Jemima Parry Jones 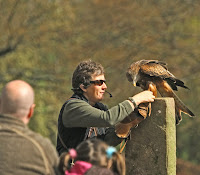 Jemima Parry-Jones MBE and Red Kite
A couple of weeks ago, we had an official Hawk and Owl Trust visit to the International Centre for Birds Of Prey http://www.icbp.org/. I remember as a young naturalist being inspired by the original owner and founder the great Falconer Philip Glasier who would give his time freely during our visits to talk with me, mainly about wildlife and in particular wild owls.
As most people know the centre was taken over by his daughter Jemima Parry-Jones MBE, then JPJ left to conquer the U.S.A. Now before this story gets too complicated lets bring it up to date. Now Jemima is back at the Newent location she sold just a few years ago.
It was really good to see her back home doing what she does best! During one of three flying displays JPJ apologised to the audience for the fact the centre had only been re opened since February so Birds flying were not yet fully fit. Now folks I have seen some flying displays in my time, and all the birds did very well indeed, in particular the last Falcon which was the best Lanner Falcon flying I had seen for many years. So Mima, if you are reading this, if that's below par I can't wait to see the real thing! People often ask me where they can see the best flying displays and I always used to say Newent with JPJ or Ashley Smith at Hawk Conservancy, Weyhill, Wilts. Now I can say it again with pride and know that no one will be let down.
Welcome back Mima you have been missed!
Here is the link again to the website http://www.icbp.org/ if you want a great day out with Birds of Prey whether you are taking pictures or genuinely interested in the art of Falconry and of course Bird of Prey conservation you will not be let down, get yourself off to Newent a.s.a.p.
I took lots of pictures so here are just a few. 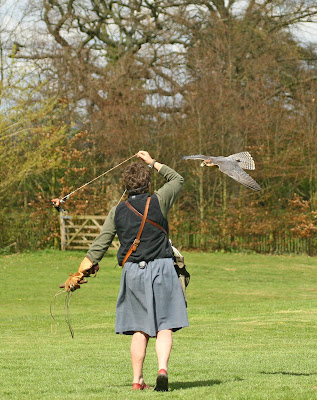 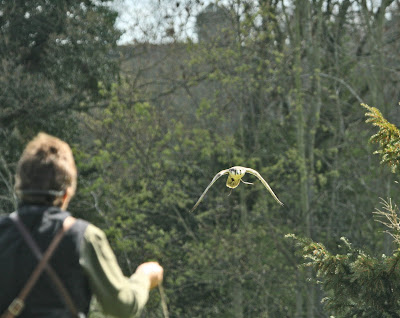 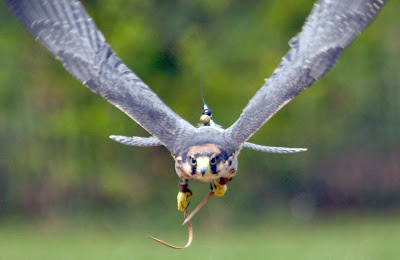 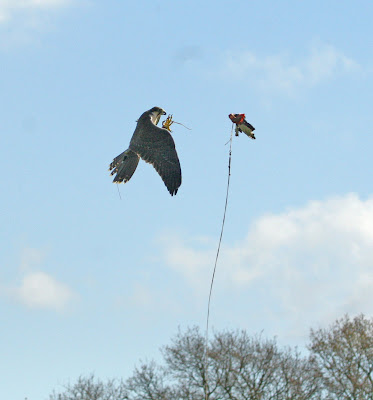 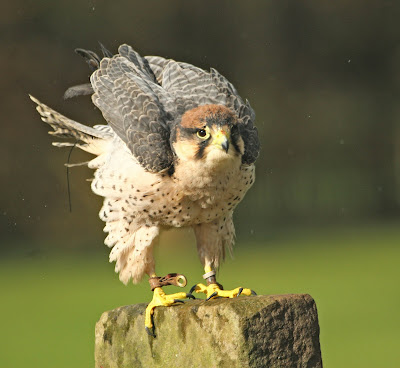 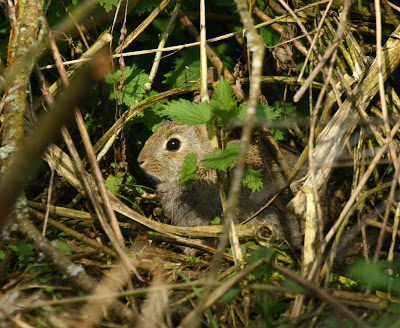 The dawn chorus season has started, and thanks to so many that want to take part in this years events means I have had to put more early mornings on than ever before! I do think the popularity of this years dawn chorus is because people are fed up with the gloom and boom of the credit crunch and everything else on the news. For those of you that have never done this before, well its a magical experience. We meet at 0400 hrs, walk for about half an hour to a secluded woodland, this were at that time of the morning the smell of wild garlic will wake you up if nothing else. I point out all the birds singing as we become apart of the awakening world around us.

Around 0600 we move into the open ground to listen for Willow Warblers, Yellowhammer, Skylarks, Redstart etc. Then by 0730hrs its breakfast! On a nice sunny morning its a magical way to observe the dawn breaking, and even on rainy mornings the birds won't let us down.

I'm off now for an Easter break for a few days. Wishing you all a happy Easter and lots of chocolate, yum yum! 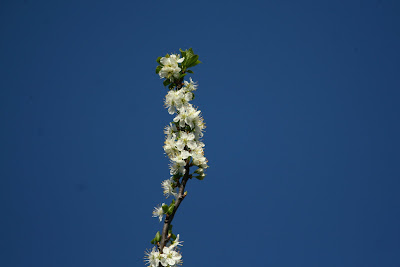