Farmers To The Rescue

A very apt farm visit this week, especially after the announcement that the CLA/NFU backed voluntary scheme is the now the one favoured by Minister Hilary Benn to be the replacement for the old Set-A-Side scheme. The farm is in deepest brightest Somerset and is 1000 acre mostly arable farm run by Henry Lang and his brother. Both share a huge passion for farming and for wildlife which really shines through. 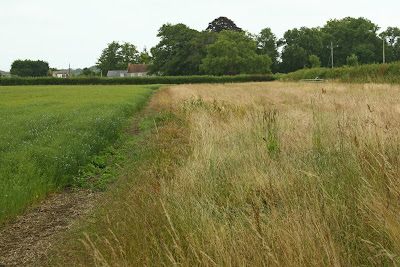 Along side the cash crop of the large arable fields are wide margins of rough rank wild grasslands, this is part of DEFRA's higher level stewardship scheme. Walking along these margins I stop Henry and gasped at the massive number of Butterflies flying up in front of me, the scene was more reminiscent of central Europe and certainly not England. Bee's of various species were also on good show, and with just Bee's and Butterflies this would have been good enough for me as proof of the value of these margins, but it got better. 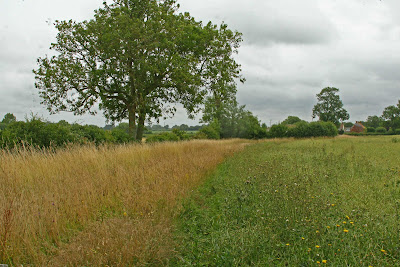 A bird singing caught my ear, and not one but more and more joined in from the hedgerow along side the margin. The song sounded like the bird was saying "a little bit of bread and no cheese" Many country folk would recognise this song as the song of the Yellowhammer, which has declined so much in the UK that now it is afforded a red list status on the BCC list (Bird Of Conservation Concern). Henry has erected 8 barn Owl boxes throughout his farm, and it was these boxes that I was here to check. The take up of these boxes by barn Owl would be totally reliant on the bio-diversity quality of Henry's grassland margins as this is would be the only areas were the Owls could catch their primary food source the Short-tailed Vole.
Of the 8 boxes checked, 5 of them had barn Owls in them, with 3 of those having actual active nests. The other 3 boxes were, 2 = empty and the other 1 had an active Stock Doves nest. 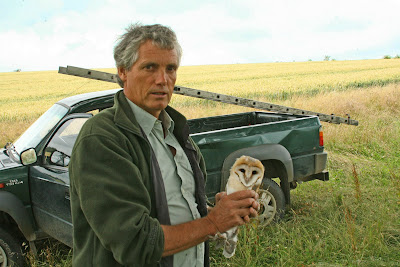 Above is a picture of Henry with an 8 week old barn Owlet, just after I had rung/banded it, ring number GC74933, this first nest had 3 Owlets around the same age. The second active nest had three young also, yet much younger than the first as these were around 3 weeks with the youngest too young to have ring placed on it. Picture below is of a by now a very proud Henry with the 2 that were old enough to ring. 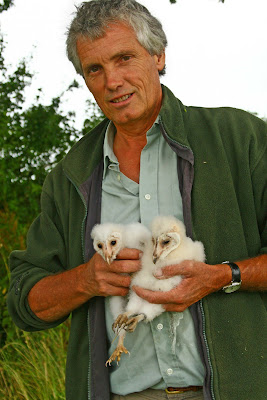 The third active nest had both parents in the boxes and the female was incubating 4 eggs (so far).
So of the three nests that were active then at the first the young were nearly ready to fledge, then the second nest was a month behind the first, leaving the last nest with eggs probably a month or even more behind the second, what a strange season, climate change? 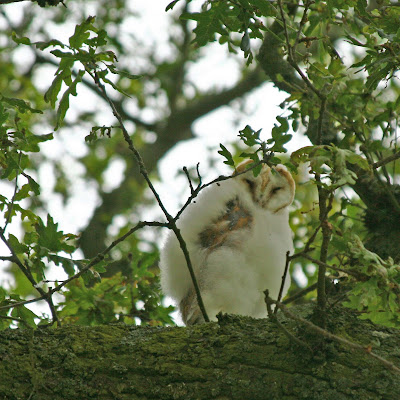 The boxes that Henry had provided were real top quality, but not just the workmanship also his careful thought of where to put them, this must be highlighted. In the picture above is one the Owlets branched, yet very safe in this old English Oak. The box was placed in the crown of the tree with the owlets having safe access to the whole tree without the risk of falling to the ground and being eaten by Foxes. A massive well done should be said to Henry and to everyone that's involved with this farm, as it shows what can be done for whole bio-diversity by number and species, and that this type of farming really should be used as an example of the care towards wildlife that farmers really do show. I would far rather my tax went on schemes like this than buying duck ponds or cleaning moats for our MP's.
Thanks Henry for a great day, and what a brilliant take up of your barn Owls boxes and showing me how farming and wildlife really can go together.
Posted by Chris Sperring at Saturday, July 18, 2009 2 comments: 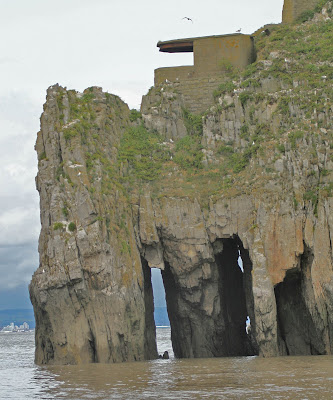 Steep Holm north side facing Wales
Working once again with producer Mary Cowell from BBC Radio 4, this time on a programme about the Severn Estuary. I didn’t imagine my tasks would include a choppy boat ride and a day marooned on a wind-swept island! This was, however, where I found myself last Saturday. Steep Holm is just 5 miles off the coast of Weston-super-Mare, but feels far more remote, and is very Mendip-esque. Indeed, this tiny island was only separated from Mendip by the last ice age.
Now owned by the Kenneth Alsop Memorial Trust, Steep Holm covers around 48 acres (depending on tides) and measures 260ft at its highest point. Absence of mammalian predators it affords it’s wildlife ultimate protection; making this island a fantastic place for seabirds to nest. In particular Gulls seem to enjoy it here, and three species make up the bulk of the Gullery; the Herring Gull, Greater Black-backed Gull and Lesser Black-backed Gull. 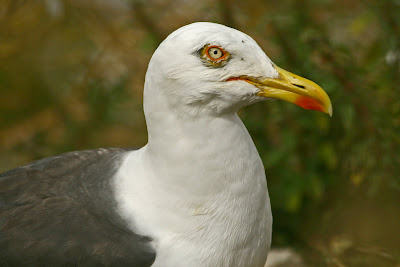 Our guide for this trip, and the person I had to interview was the chairman of the Kenneth Alsop Memorial Trust, Tony Parson. It was fascinating to share some of his encyclopedic knowledge of both the human and natural history of this unique island, which I have gazed at across theBristolChannel for many years, but never visited.
For the few mammals that made it to Steep Holm (aided by humans) the isolation has been both a blessing and a curse. Both rabbits and hedgehogs were common here, but both have now been wiped out either by harsh weather or disease. One mammal that is still doing well, though, is Britain’s smallest deer, the Muntjac. These shy little animals (just 50cm at the shoulder) are everywhere, although you do have to be pretty lucky to spot one! 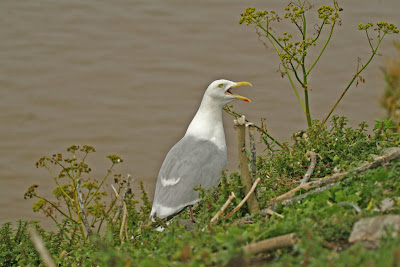 Walking around the island during the summer months can be a little daunting and is definitely not for those with ornithophobia! The Lesser Black-backed Gulls in particular fiercely defend their nests by dive-bombing anyone that gets too close. The most common species is the Herring Gull; that epitome of Sea Gulls; bold and noisy, and not averse to steeling an ice-cream or chip straight from an unsuspecting tourists hand! The largest of the Gulls on Steep Holm is the Greater Black-backed, which is substantially bigger than the Herring Gull and quite capable of catching large sea birds and mammals such as Rabbits. Only eight pairs of these giant Gulls are currently breeding on Steep Holm, but even the familiar and once very common Herring Gull has seen huge decline in recent years, and is now Red Listed on the Birds of Conservation Concern List (BCC). The only predators any of these Gulls need worry about are Peregrine Falcons and of course other Gulls which might take the odd chick or weak adult. In fact, the gulls themselves often have to travel great distances to find food; searching out ploughed fields and rubbish tips and other areas where people leave waste such as beaches, playing fields and picnic areas.
Anyone looking for a truly different day out should definitely visit Steep Holm, to sample its special wildlife and learn about its fascinating human history. Boat trips go from Weston-super-Mare, and all the information you need can be found at http://www.steepholm.org/ or by calling 01934 522125. Of course, you will need to be able to clamber in and out of boats. Enjoy this forgotten corner of Mendip Hills, everyone that looked and ignored must visit. 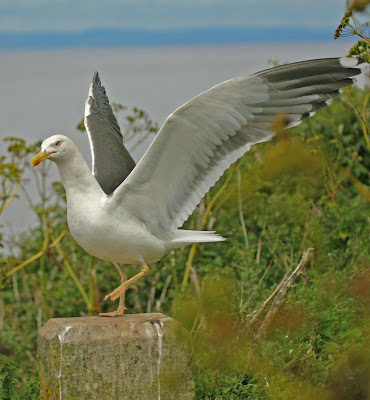 I have no TX date yet for this programme on BBC Radio 4 but it will feature as part of the new series of Nature.
Posted by Chris Sperring at Wednesday, July 15, 2009 No comments:

Well done once again to everyone involved with the Yatton and Congresbury Wildlife Action Group aka YACWAG. I was carrying out the annual monitoring of their boxes, Barn Owl and Kestrels. The management of the reserves is taken straight out of the Chris Sperring manuscript of how it should be done, indeed my early 90s work at Portbury was part of the inspiration for their success now. And boy what success, as we walked across the fields towards the boxes,
Butterflies of differing species such as Large and Small Skipper, Ringlet, Meadow Browns and of course my favourite the Marbled White were all at times in such large numbers its was quite breadth taking. The bird species list is endless check out their website to see for yourself.
The first Barn Owl box had an amazing five Barn Owlets, interestingly these were younger than the second nest which only had three, this has been a pattern this year in that if the Owls bred early the number of young is low, those that started later have more owlets. If you remember its exactly what I was saying earlier in the spring. It means we had suppressed grass growth leading to later breeding in the Short-tailed Vole which is their main prey item across these open grassland areas. But what to me was good was that one small reserve had 2 pairs of Kestrels both of which had young on the wing. This species has shown some quite big declines in the U.K, but here at least not only was the young production good but also from 2 pairs in very close proximity to each other. The Short tailed Voles here are having a bumper year. Now I have heard other's state that "this is a bad year for Voles" yet so far all my own Vole study plot areas show really good Vole numbers as did YACWAG's Kestrel and Barn Owl results. Just goes to prove you can't have a national up and down of Voles it does not happen. YACWAG is a very small local based independent wildlife charity. Yet what it does is up on a scale as great as any of the national NGO's, it buys up bits of local land and turns it into a wildlife paradise, it also proves that these tiny islands in the area, can produce maximum bio-diversity. YACWAG involves its local members of the public, they in turn make a major difference for the environment that surrounds them. Its all so simple yet what I have seen it makes such a huge impact for little fuss or money.
My regards to everyone involved with YACWAG and thanks for a great day out on the reserves, and for making such great habitat for real bio-diversity and not just a select few on a priority list, well done folks your the best!

All this reminds me of another organisation of doers, small yet very effective. The Hawk and Owl Trust springs to mind! 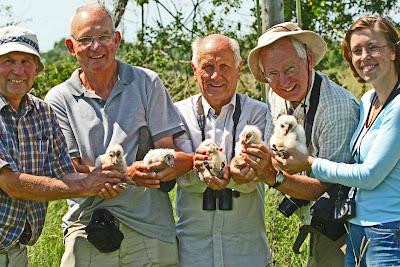 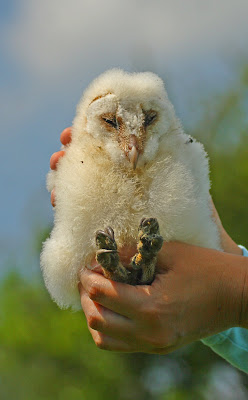 Close up of a YACWAG Babe 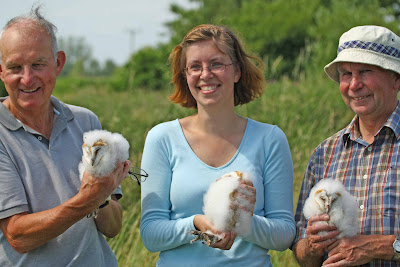 Three Older babes from the second nest of YACWAG 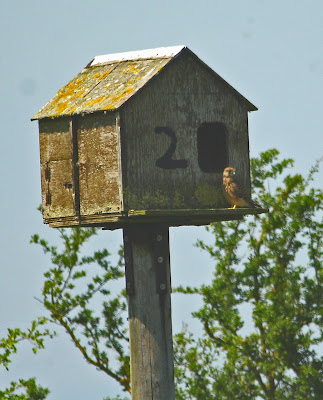 Kestrel recently fledged from the box 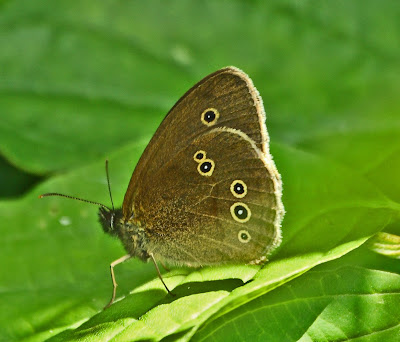