When I used to walk on stage with this guitar they use to call it "The Beast" Maybe because of its weight, or more than likely because of its incredible sound. I'm of course referring to my double necked guitar. This 12 and 6 string electric guitar has had a complete make over and restored to its original glory by Guitar expert Charles Sundquist from Stoke St Gregory.

The Beast
I have not used this guitar for at least five years, and really thought it was the end of it.

However Charles has done an amazing job on it, completely re-doing the wiring, pick ups and the machine heads. One of its main problems was that it was unplayable due to the frets being pitted, again the workmanship that's gone into the neck is incredible as I have just been playing it now, and it sounds better than I have ever known.
I bought the Guitar in 1991, and according to Charles it was made in Japan around the early 1970s, its a Gibson copy made by CSL, and looks like 2 Gibson SG's bolted, and not glued together. Charles has also re wired the guitar to probably as he says "the way it should have been" so that you can have both necks switched on at the same time. I think when I bought it, someone had probably already changed things from its original spec, and Charles has painstakingly taken it back in time to what it should have done. I have just played it again now and can't wait to get this guitar back on stage. So many songs were written with this guitar, and now I must say once again it plays so much better than ever.
Charles plays his musicman Guitar/Me on the double neck 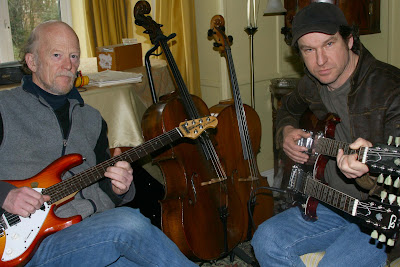 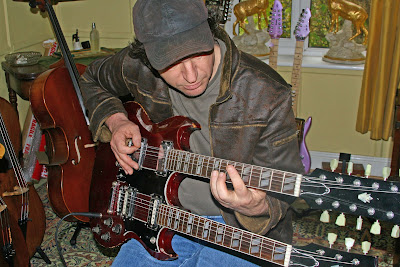 Reunited with an old friend

According to Charles it may well be a collectors item, but to me its something that should be played on recordings and also live as well, in other words used!

Hey Kenton! The Drummer of Raptor currently somewhere in Brazil, if you are reading this, then time to come home we have some serious rocking to do...

Charles thanks for all your help with this guitar, it really sounds like new! And full of inspiration..

Just spent the weekend on Mendip Hills. Only just got there, were as the Snow was melting here in Portishead, but on Mendip you may as well been on a different planet. The picture below is the after affects of Thursday 5th Feb blizzard, the drift in this Mendip lane is measured at around 5 foot. 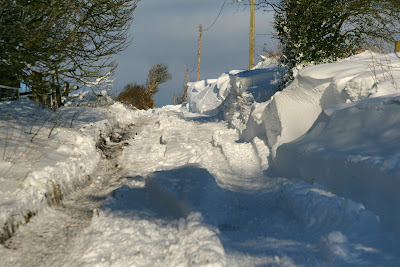 With the landscape transformed, many species of bird seemed to move out from these top areas, but predators like Kestrel Buzzard, and Owls such as Tawny and Barn were falling victim to the conditions. However some were surviving and good to hear story's from one such Mendip farm, were by Barn owls and even Little Owls were holding on, indeed this farm still one week afterwards has got a lot of Snow still lying in the fields. 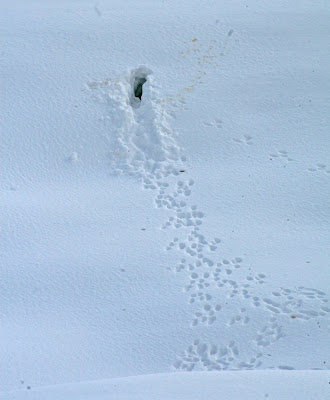 Above is a Rabbit hole, which was buried under Snow however within 24hours you can see the Rabbits are back in action and judging by the tracks leading away from the hole managing to get by. Below is the view looking towards the Velvet Bottom (Somerset Wildlife Trust reserve) gate.
Walking in the Snow along this path was really quite tiring as in places on the footpath it was 2 foot deep, I really needed the Swedish Snow shoes for this walk! 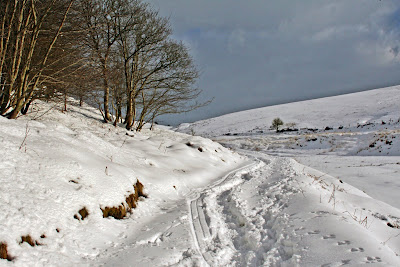 The contrast of light at sunset was stunning, from the fire of the sunset sky, to the almost Artic looking scenery of the open top of the Mendip Hills 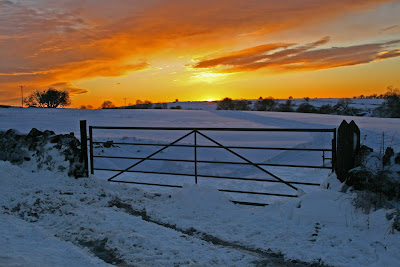 In the picture below its not Snowing, this is in fact Snow being blown around by the bitter north easterly wind, this is what was causing some of the major drifting. On the night of the 7 th of February this areas night time temperature went down to -10C, this due mainly to the wind chill factor. 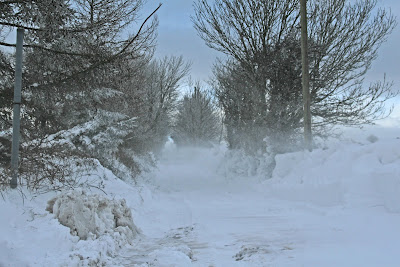 And finally below is St Hugh's Church at Charterhouse, this a wonderful Swiss looking Church, always gets lots of photographs taken of it. 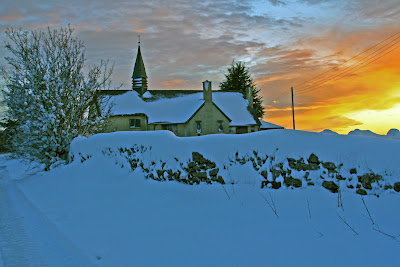 Well I must have taken around 500 pictures of the Snow, now I have not got the time to process them all, so this is just a selection. This weekend should have seen the start of the Long-eared Owl surveys. Yet one week on the deep snow still causes problems, so I have had to cancel both survey nights on Quantock and Mendip. A thaw is in place, yet during the evenings it freezes again.
Hopefully this is last of the Snow, and the surveying can begin next weekend. Once we have started any early results will be published here on this blog.
Posted by Chris Sperring at Monday, February 09, 2009 2 comments:

We are just about to start the annual Long-eared Owl surveys.
This year we are surveying Quantock and Mendip Hills area's of outstanding natural beauty, (AONB). If you live within or around these areas and want to get involved, then please e mail me. I can send you dates, times and locations etc. Training is provided and the knowledge that you are helping one of the U.K's rarest Owls should be reason enough to get off the couch and out in the countryside at night.

We have been erecting willow baskets for Long-eared Owls on Mendip and Quantock, here's a some recording I did the other day on Quantock, which should explain more.

Don't forget for more information e mail me at info@chrissperring.com


Posted by Chris Sperring at Sunday, February 01, 2009 No comments: