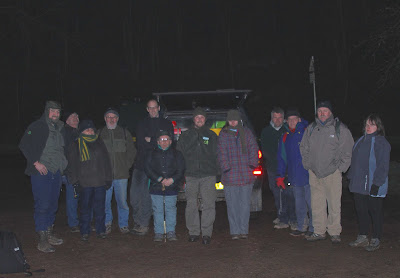 Well lets cut words and get to the point. We got One! 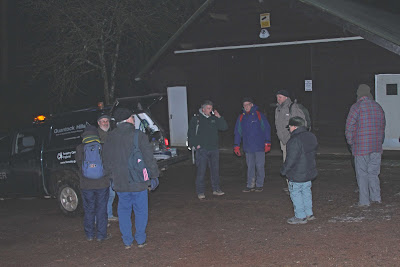 Evening of 20th of Feb was as predicted not just sub zero but also along the top of Quantock still had lying Snow from the big fall a couple days before. We covered 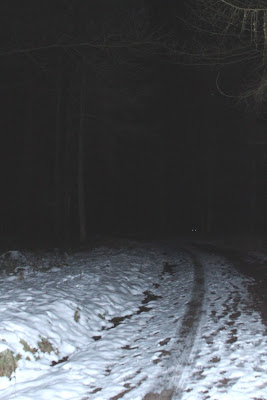 most of the forest area of Quantock the main team breaking up into smaller groups. Play back (recall) was done on the half hour after teams synchronised watches or mobiles. My team covered the central to edge areas with some clear fell. We had achieved our objective on the first stop at 2030hrs, we played back for 5 mins, then listened and at 22.38 a male Long-eared Owl was heard calling and continued on for longer than 5 minutes. After last year not hearing Leo at all on Quantock, this is a great start. There are three survey nights left for Quantock all taking place at weekends. Tonight (Sat 20th is the second of the Mendip Long-eared owl surveys, and we are out and about in the central areas. 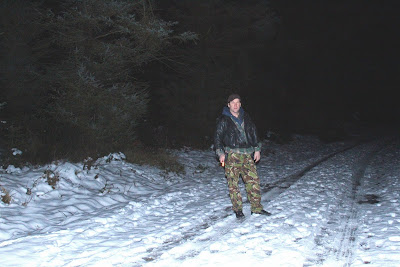 Cool dude in the Quantock forest, or self indulgence
Next week from Monday to Thursday I'm away carrying out bird surveys and Long-eared Owl surveys in forests on Dartmoor in Devon this as part of the Forestry Commission backed project. I will update the blog upon my return.
BFN And please no Snow on Dartmoor next week.
Posted by Chris Sperring at Saturday, February 20, 2010 No comments: 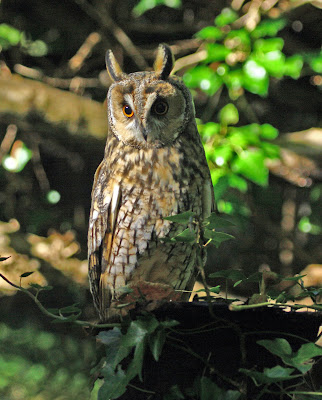 It's been a hectic past few weeks. The Long-eared Owl Hawk and Owl Trust surveys on both Mendip and Quantock Hills are now up and running with the first of 5 nights in each area achieved so far. These two survey areas are carried out at weekends, whilst during the week I'm carrying out surveys for the Forestry Commission across the south west of England; these include day time bird surveys followed by night time searches Long-eared Owl. So far, I have done 2 forests on the Blackdown Hills in Somerset, and 5 forests on Bodmin Moor in Cornwall. So to recap then, no Long-eared's so far on Quantock, one possible record on Mendip, even Tawnies are very quiet. When Tawny Owls are so quiet at this time of year, it could mean that they are heading for a good breeding season (I have found this in the past), so fingers crossed for them. The South West Long-eared Owl Forest projects, is a great opportunity to meet up with more of FC's brilliant forestry workers. Of course on the Quantock Hills we are already good friends with Boyd Hay and Andy Harris, neither of whom need any introduction on this blog, and on Mendip we get great assistance from Dick Gossling and Lorne Campbell. However now on the Blackdowns and Bodmin we meet new foresters. The Blackdown forest survey both day and night were very weather biased, mainly because of high winds and constant rain. With so much talk about Goldcrest suffering because of the winter weather, it was a great surprise to find so many, not only active on the Blackdowns but also in fall song.
This past week saw us out on Bodmin Moor, and being shown around by another great forester Chris Mason. Chris was like the rest of the Forestry people we have met so far, not only easy to get on with, but very enthusiastic about the forests and the wildlife that live in them. After an initial look around we settled down to the surveys. The weather once again played its roll but instead of being wet and windy, now it was cold, with bone chilling winds coming from the east. I must say it was my coldest ever visit to Cornwall; with Snow flurries during the first day and night surveys. The first night survey on Bodmin was rewarded, with the unmistakable sound of a male Long-eared Owl, this was just a short burst of call and this after we had used some playback calling on a portable CD player. During these Bodmin nights not only did we have the support of Chris Mason, but also an excellent crew of volunteers from the Cornwall Bird Watching and Preservation society. My special thanks to Chairman Derek Julian and his fellow members of the society such as Andy Mason, Colin Selway, Dave Conway and Dave Miller all of whom gave up their own time to come out with us on the freezing night time surveys. 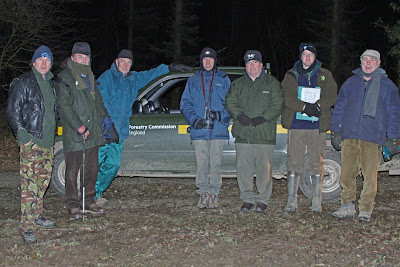 The Bodmin team, including Chris Mason and myself
We recorded many Tawny Owls as we would have expected, but the Tawny's were more subdued as with other aforementioned areas, they clearly have things other things on their minds. We did record 3 calling male Long-eared Owls and 1 female from the 5 forests looked at over the 4 nights. On Thursday at 12.15 in the afternoon, Emma and I actually recorded a short burst of male Long-eared Owl call. This daytime calling is a first for me and was very exciting. That evening we returned to the Forest were Derek and Andy recorded the same male calling again. All of us were walking back together across a clear fell area still within the forest at around 2100hrs, when Andy mentioned he heard something coming from the open area. I told him to put his torch on the spot where the sound was coming from, what he actually lit up with his torch was a Long-eared Owl perched in a small fir tree firmly fixed on looking down into the wonderful rough grassland that was typical of the open areas surrounding and within these forests. 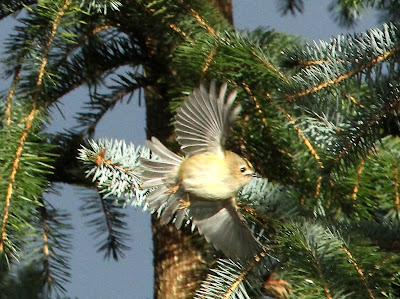 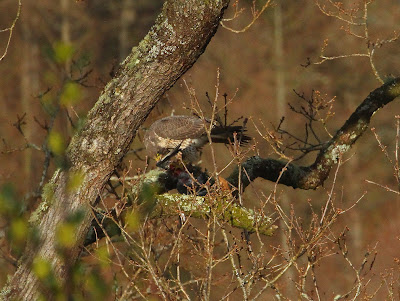 Peregrine Falcon on a kill, lucky picture as we walked round doing the day bird survey 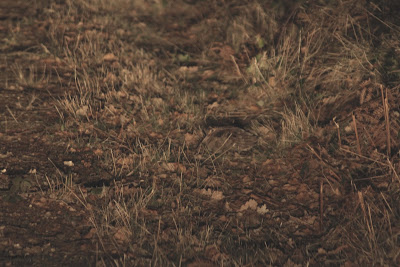 In the Forest at night, spot the Woodcock 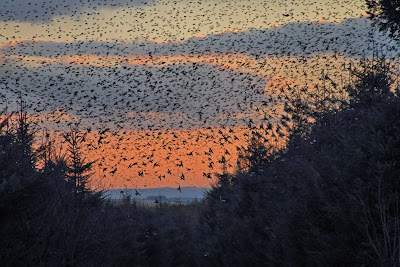 Goldcrest, Siskins, Song Thrush, Blackbird and many other species of bird were recorded during the daytime surveys, probably most notable for being my luck having the camera with me, was a Peregrine Falcon which we found on a kill as we walked around one of the larger Forest tracks. Another was Woodcock, which we found active along the same forests tracks at night. Towards the evening on the 3 rd day we found a huge roost of Redwing within one forest, and not more 200 metres ahead and even bigger roost of Starlings, these arrived around half an hour before dark, and it was said there were 500,000 in the roost, I reckon at least a million, I judged this number to be true from the amount of white that dropped on my head and clothes. The raptor response to this was superb and was brilliant to watch. Emma and I honestly, nearly got knocked over by a Sparrowhawk that used the paths to fly low along, so determined was it to get through. Buzzard's were present throughout along with 16 Ravens who roosted in a neighbouring forests, this obviously after they had feasted on Starling first. 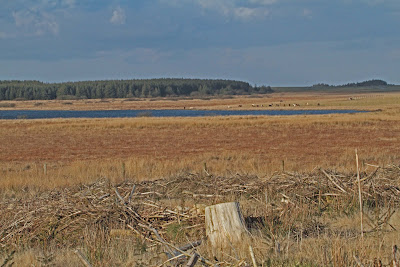 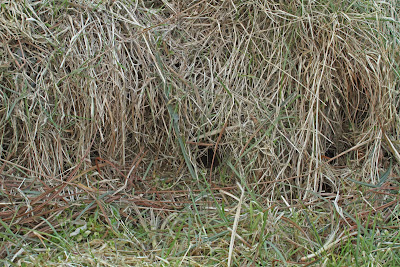 Close up of the ungrazed grassland full of Vole evidence
A full report is being written for the Forestry Commission so this is just a snap shot of what has been happening. Next week we move on to Dartmoor for 4 days and nights, this after a weekend surveying Quantock and Mendip. Any quick updates will appear on Twitter and I now have a facebook account as well, apparently. I took some video of the Starlings on Bodmin Moor and will try to edit that when I have time. Let me once again though say a huge thank you to Cornwall Birdwatching and Preservation Society and specially to Chris Mason of the Forestry Commission Sorry its been so long since the last blog but I hope you can all see why.
BFN
Posted by Chris Sperring at Saturday, February 13, 2010 1 comment: